The “Inspire to Aspire Conference” although ended will continue to haunt many, if not, most Toastmasters for many moons to come. District Director Dr William Lau, DTM said that the conference theme that he conceived epitomized the tertiary phase of his leadership journey in Toastmasters. He admitted that it was in Melaka that he was inspired by PIP Gary Smith to take up District Leadership in 2011 and to Melaka he is returning after eight years to fulfill his aspiration as the District Director.

The District 102 Executive Committee is indeed grateful that the Chief Minister of Melaka consented to officiate and declare the opening of the Conference on Saturday, 27 April 2019. The presence and participation of IPE Deepak in the Conference added significance and color to the historic event.
[masterslider id=”7″]

The Chief Minister of Malacca officiating the opening of the District 102 Annual Conference on Sat 27 April 2019 at Holiday Inn Malacca by placing his palm on the IPAD to trigger off the specially designed official opening digitalized program to the thunderous applause of the audience.

The Conference attracted 365 Toastmasters and guests from the various States of Malaysia, Singapore, New Zealand and India. The event was indeed international in nature; thanks goes to the able and effective leadership of the two indefatigable Co-organizing Chairs, Dr Somsubhra De, ACS, ALS and Mak Chee Kin, ACB, ALB and their dedicated and highly committed Organizing Committee members who had been working tirelessly during the past nine months.

The Conference took place at the famous Melaka Holiday Inn with the great and generous support and encouragement of the State Government of Melaka and some of its agencies and organizations which included inter-alia the State Tourism Board, the Majlis Bandaraya Melaka Bersejarah (MBMB), Hang Tuah Jaya Municipal Council, St. Francis Institution and corporate entities.

The Conference incidentally eclipsed with the month-long official celebration of the 13th Anniversary of Melaka’s Historic City. This no doubt added greater pomp, meaningfulness and value to the Conference.

Highlights of The Conference

The Conference was well planned and executed in that sufficient time was allotted for education, district business, clubs and individuals’ recognition and most importantly, food and beverage and press coverage.

Melaka Manipal Medical College and Johor Corporations were the two recipients of the Toastmasters International Corporate Recognition Awards 2019. The prestigious Awards were presented by IPE Deepak to the two nominees’ representatives for their continued contributions, support and commitment to the advancement of the ideals and educational programs of Toastmasters International.

The importance of time necessitated both the winning and recognition awards presentation ceremonies to be combined without sacrificing and compromising on efficiency and significance.
The District Executive Committee Meeting took place on Friday, 26 April 2019. It was conducted smoothly and concluded in a record time of 50 minutes.

With respect to the District Council Meeting (Meeting) which was held immediately after lunch, Chairman, Dr William Lau, DTM proposed a slight amendment to the Agenda; in that, the items on Proposed Club Alignment, Nomination and Election of District Officers were were moved immediately before Item 6 of the Agenda. The numbering of items was changed accordingly. The proposal was accepted unanimously.

A short discussion took place on campaign protocol violations; to which the Chairman of the Meeting responded that he took cognizance of the complaint that was emailed to him the night before at 11.00 pm. He said that he immediately responded in writing to the complainant and took prompt action and advised the “protocol violator” to remove all the “allegedly offensive photographs” from the social media. On this matter, Chairman advised Toastmasters to be more magnanimous and forgiving and that we should not allow slight acts or omissions to deter us from exercising the traditional practice of “friends helping friends to succeed” and “learning from mistakes and failures”, that constituted the hallmarks of success in Toastmasters.

The District Director further related the glorious past of District 51 and 102. He proudly expressed that District 51, the parent District of District 102, emerged as The Number One District in the World from 1989 to 2004. He further recognized the Past District Directors of District 102 who had helped out in the Conference. They were PDD/PID Joseph Gomez, DTM, PDD/PRA Dr Arulnathan, DTM, PDD Low Yat Seow, PDD Ramdas Nayar and IPDD Azizah Abu Hassan. These unsung heroes who formed the Council of Eminent Toastmasters (COET) helped administer the District Credentials Desk. He advised future Conference Organizer(s) to enlist wherever possible their help, advice and wisdom. They are the gems of District 102.

All Triple Crown Achievers and Achievers for Pathways Level 5 were also recognized. Respective pins and medals were presented by the Trio.
On the Gala Night, Clubs achieving President’s Distinguished Goal and those achieving DTM were prominently recognized and featured.

All the education sessions were held on the second day of the Conference. The following speakers spoke on:
• IPE Deepak – “Are You the Best in the World? and Walk the Talk-Talk the Walk”
• Lorraine Taylor, DTM – “Impact Leadership and Online Clubs”
• Sunil Hasmukhararay – “Solution Focused Leadership”
• Yan Huey Miin – “Leading People in a Digital World”
• Ching Lee Hwa – “Communicate to Create Connection”
• Tan Chun Shen – “Finding Inspiration from History”
• Liew Syh Yeh & Tan Chia Yong – Speakers from the Mandarin Section.

Khalid Idris, Division E Director, successfully bade for the District 102 Conference 2020 in Summit Hotel in Subang. Details will be announced to all clubs in due course.
The District Director also expressed his profound gratitude for the laborious work put in by the Awards Committee headed by Special Assistant Benny Cheah, DTM. His Support Team Members worked late into the night to sort out, arrange and ensure that the achievers received the awards correctly.

In the closing address, District Director Dr William Lau thanked from the bottom of his heart the Conference Organizing Committee, the Most Honorable Chief Minister of Melaka, the Historical City Council of Melaka, Melaka Tourism Board, the Council of Eminent Toastmasters, Sponsors, Donors, corporate entities and other organizations and those who had helped out in one way or another but whose names were omitted inadvertently herein.

Having attended no less than 30 Semi-annual District and Annual District Conferences and TI Conventions over the past 21 years, the District Director felt that this particular Annual District 102 Conference 2019 was undoubtedly one of the finest. It shall be long remembered by all the Conference Delegates and Attendees. Let this high standard be perpetuated.

The “Inspire to Aspire Conference” has come to end. For those who came to learn, may they return safely to continue to serve. While on public roads, laws and orders are no longer an illusion! Please be law-abiding. 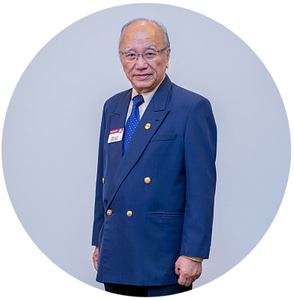